Following Government advice to address the Coronavirus outbreak all our usual meetings and events have been cancelled. However we are meeting regularly using Zoom software and are supporting our local community in whatever way we can.

We aim to resume normal activities as soon as we can, meanwhile keep safe and well and take care of yourselves.

Some good news for a change – two of our entrants for Rotary Youth Competitons are winners this year. Congratulations to Martha Wilson, winner of the District Young Photographer Competition and also to Ellie-May Cunningham, winner of the Junior Section of the District Young Writer Competition. Both these winners will be receiving a prize from the Pembroke Rotary Club in the near future and their entries will be put forward to the National Competitions later in the year.

Two members of the Pembrokeshire branch of The Samaritans. Helen Williams and Sue Oldreive spoke about the work Samaritans do locally and throughout the UK and ROI to Club members last week.  Each year in Wales some 360 people die by suicide; this is around 3 times the number killed in road accidents. Men are three times more likely than women to die by suicide. Suicide is also, tragically, the biggest killer of young people aged 20-34. Suicide is not equal— if you are less well-off and male you are 10 times more likely to die by suicide than more well-off men. For some, Helen explained, suicide can seem like the only option. It’s a complex issue. Behind the statistics are individuals, each with their own unique story. Every suicide has a devastating impact on the person’s family, friends, colleagues and community. By providing emotional support, Samaritans volunteers are making an important contribution to suicide prevention.

Helen and Sue were keen to emphasise that The Samaritans call lines and email service are not only for people who feel suicidal. 24/7, 365 days of the year.   Samaritans are there for anyone who is feeling down and needs to talk and Samaritans also work in their community offering third sector information days, army liaison events, support to schools and  colleges, and coffee mornings.

They emphasised that The Samaritans is run almost entirely by volunteers. As well as Listening Volunteers, Branch members run all their administration including the work of the Treasurer. Pembrokeshire are currently recruiting for new volunteers who will receive free training, which is highly thought of both within and outside the organisation.

Visit www.samaritans.org/wales/support-us/volunteer/ to find out more.

Helen and Sue were thanked by President Gavin Lloyd for giving up their time and giving such and interesting and informative insight into the work of the Samaritans. The evening had been arranged by Rotarian Malcolm Lowless.

World Rotary Day (23 February) is being marked in Southern Wales by Rotarians from the area celebrating the milestone $1 million they have raised towards the major goal of eradicating Polio worldwide. The money raised is specifically towards polio eradication and is in addition to the many thousands of pounds Rotary Clubs raise for local and international projects each year.

Since Rotary and its partners launched the Global Polio Eradication Initiative (GPEI) over 30 years ago, the incidence of polio has plummeted from about 350,000 cases a year in 125 countries to173 cases in 2019. Just two countries still report cases of wild poliovirus: Afghanistan and Pakistan. In order to sustain this progress, around 2 billion doses of the vaccine still have to be given to more than 400 million children in up to 60 countries every single year.

Coming soon – Pembroke Male Voice Choir are putting on a concert for Pembroke Rotary on Friday 20th March to be held at Ysgol Harri Tudur. Tickets will be just £6.00ea and the monies raised will go towards Rotary causes.

Mr Nick Makin was the guest speaker at the recent evening meeting of the Rotary Club of Pembroke.  He gave a presentation on his experiences of being a young artillery officer in Berlin during a 12 month posting before unification and the collapse of the Berlin Wall.  He talked about how the divided city came about, what life was like living within Berlin and the type of training he and his soldiers conducted.

Nick is currently the School Business Manager at Ysgol Harri Tudur/Henry Tudor School.  He served a full career in the Army as an artillery officer, leaving after 34 years in June 2018 in the rank of Colonel.  He has conducted operational tours in Northern Ireland, Iraq, Afghanistan and with the United Nations; he was awarded the OBE in 2014.

President Gavin Lloyd thanked him for a most interesting presentation and the evening was arranged by Rotarian Malcolm Lowless.

With a topic of “This House believes that Cruise Ships should be banned” a team of 3 young students from Ysgol Harri Tudur took part in the debating competition Youth Speaks this week. Gethin Lewis, Daisy Smith and Seren Cowen did a really good job of proposing and opposing their motion about cruise ships and Daisy Smith was chosen as the Best Proposer for the Senior Age Group competition by adjudicators Nan Llewellin and Roy Thomas. Youth Speaks is just one of many Rotary Youth Competitions held each year at local, regional and national level and our Club is delighted that the students did so well. Our thanks to their teacher Catherine Cumine for all her encouragement and support.

Working with new school Ysgol Harri Tudur the grand draw involved drawing eleven prizes from a lottery drum that contained over 4,770 tickets.  Tickets were sold by twelve charitable organisations who also retained the proceeds, the costs being met by Rotary.  Over £29,000 has been raised over the six year period for local causes.  The winning tickets were drawn by Rotarian Chris Williams, Past District Governor accompanied by Gavin Lloyd, President of the Rotary Club of Pembroke and Bernie Scourfield, Treasurer.

The star turns of the evening were – Ysgol Harri Tudur Show Choir assisted by the excellent piano and guitar playing/singing of Connor Adams, a young man who must have a bright future in front of him. 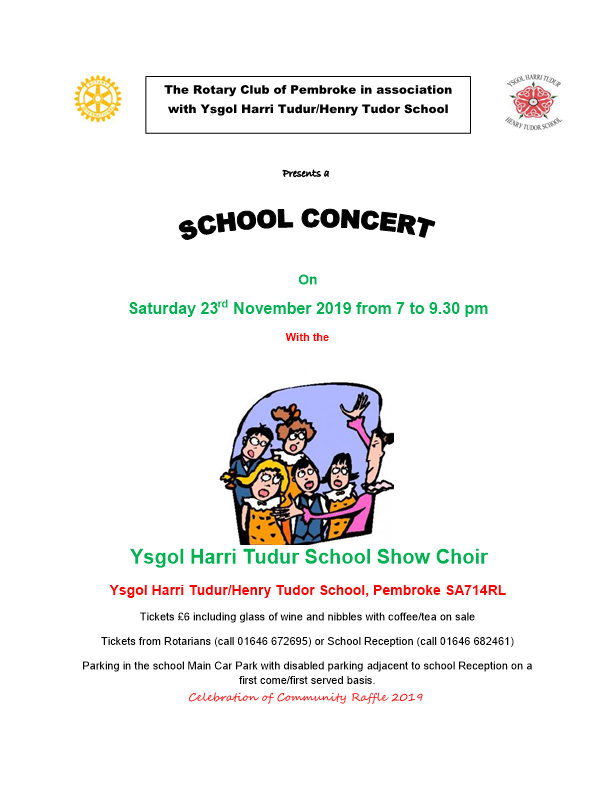 Pembroke Rotary Club celebrated the 6th year of running its Community Raffle on Saturday 23rd November. The event was again organised by Rotarian Bernie Scourfield. Working with new school Ysgol Harri Tudur the Grand Draw involved drawing eleven prizes from a lottery drum that contained over 4,770 tickets.  Tickets were sold by twelve charitable organisations who also retained the proceeds, the costs being met by Rotary.  Over £29,000 has been raised over the six year period for local causes.  The winning tickets were drawn by Rotarian Chris Williams, Past District Governor accompanied by Gavin Lloyd, President of the Rotary Club of Pembroke and Bernie Scourfield, Treasurer. The evening was facilitated bv school Business Manager Nick Makin.

The star turns of the evening were the Ysgol Harri Tudur Show Choir assisted by the excellent piano and guitar playing/singing of Connor Adams, a young man who must have a bright future in front of him.

John Highlighted many of the aviation personalities who contributed to the RAF’s story at Pembroke Dock over nearly 30 years. He illustrated with photographs of airmen and airwomen including Arthur ‘Bomber” Harris and highly decorated Sunderland pilot Les Baveystock, and those from many nations. John also recounted how the Sunderland Trust had developed heritage initiatives leading up to the opening of the town’s Heritage Centre by The Queen in 2014. The Sunderland Trust is one of the local charities which has benefitted considerably from the Rotary Raffle in recent years.

John was thanked by President Gavin Lloyd who commented on his wealth of information and his extreme commitment to the Trust, ensuring that the memories of aviation in Pembroke Dock are remembered.